You are here: HomenextPEOPLEnextALBERT DE KENLEY 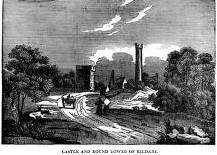 In February 1301, records show “the appointment of Aubert de Kenleye, in consideration of his service in the Scotch War, to the custody, during pleasure, of the castle of Kildare and of land of the county”.

Walter L’Enfant was keeper of the castle of Kildare. Walter relinquished the “custody of this castle to Aubert de Kenleye by writ of the King of England.

Albert had been appointed Sheriff of Kildare in 1300. He married Joan, the widow of Ralph Fitzdermot. Ralph was the descendent of the Mac Gilla MoCholmoc family, and was Lord of Rathdown up to his death. Albert had custody of Ralph’s lands until they were delivered to John, son of Ralph, in 1304 ; that he subsequently retained possession of some of the lands is shown by the deed of 1304 in which he undertakes “ to pay a rent out of Balygonyer to the Hospital of St. John the Baptist”.

In 1292, Albert had been pardoned by the King for the “trespass” which he had committed in taking Joan as his wife without the King’s permission. Joan was also pardoned for her trespass in marrying Albert. The King’s pardon to Albert and Joan was made through the request of John de Kenleye (Albert’s uncle, and Archdeacon and keeper of the spirituality of the bishopric of Meath from 1283).

The de Kenley lands at Ballygonner (identified today as Ballydonagh) reverted to the King on de Kenley’s death in the mid-fourteenth century ; this is recorded in the pipe roll for 1340-I, in which Elias de Ashbourne accounts “ for the issues of the lands and rents which belonged to the late Albert de Kenleye of Ballygonner.” After dealing with divers debts to which Albert was bound on the day of his death, Elias was instructed to hold the premises while in the King’s hand, and render fifteen shillings yearly. This presumably included Kindlestown Castle.

Turner, Kathleen (1982) If You Seek Monuments, A guide to the antiquities of the Barony of Rathdown, Rathmichael Historical Society, Dublin.