You are here: HomenextPEOPLEnextARCHBOLD FAMILY 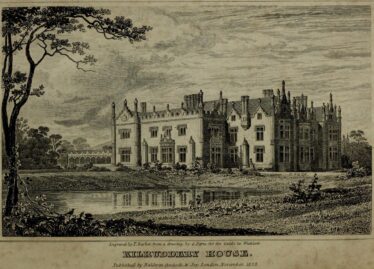 zoom
Kilruddery House 1872
A Guide to the County of Wicklow ; illustrated by engravings, with a large map of the County, from actual survey, G.N.Wright, George Petrie, W. Wakeman, Dublin, 1872. 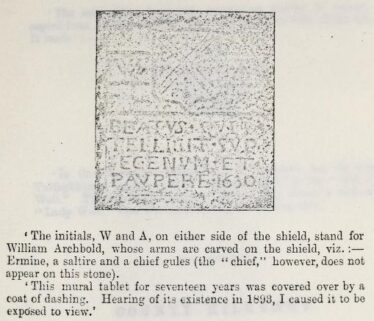 zoom
Archbold tablet, Timbold Church, Dublin (1630)
Association for the preservation of Memorials of the Dead in Ireland, Journal of the year 1905, Dublin 1905, page 353.

The Archbolds are first recorded in the area around Kindlestown in 1314, when Reginald and Robert  Ashbaud and other family members are rewarded for their “fighting with Irish felons in the mountains of Leinster,” and are admitted to “make fine for all trespasses and felonies from this day,”by pledge of Hugh Lawless. They expanded their lands, and by the late 15th and early 16th century they occupy many centres, such as Kindlestown, Bray, Rathdown, and Kilruddery.

William Mc Oliver Archbold was living at Kindlestown in 1568. William Archbold is recorded as being sheriff of the county of Dublin in 1579. In 1578, William illegally took possession of lands at Templedegin (Delgany) from a relative named Thomas Archbold. William married Margaret, daughter of Pierce Talbot of Fassaghroe. He died in 1612, his heir being his son Patrick.

In 1608, Patrick was living at Kindlestown Castle, and is recorded as “holding the Castle.”In 1612 he had financial problems, and conveyed Kindlestown, Ballydonagh and Delgany to Robert Kennedy, Sanke Silliard and Bernard Gratewell for a period of 91 years. Patrick died in 1624 aged 36. His heir was his son, Edward.

Theobald Archbold of Templecarrick (eldest son of Edward and Giles) married Kathrine, daughter of Pierce Walsh of Kilgoban, Co Dublin. Kathrine is buried in the Church of Bray.