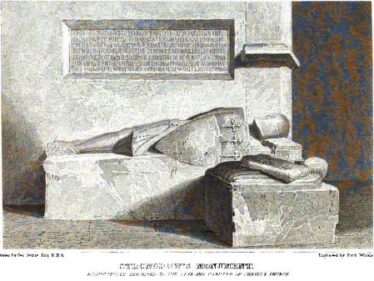 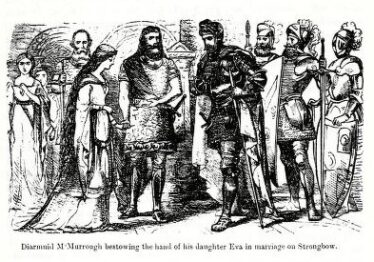 In 1169, Strongbow, out of favour with King Henry II, was persuaded by Diarmuid Mac Murchada to bring a large force of Norman soldiers to Ireland .Diarmuid had been deposed as king of Leinster, and wanted the Normans to help him regain power.

He offered Strongbow extensive territories in Ireland – and the hand of his daughter Aoife in marriage.

Diarmuid’s hunger for power had set in train the Norman Invasion. This would lead to almost 800 years of foreign rule for Ireland.

Strongbow and Raymond le Gros later had a major falling-out. When Strongbow realized how much he needed le Gros for further conquests, he secured his loyalty by offering the hand of his sister, Basilia, in marriage. Power deals and arranged marriages seem to have been the order of the day.

Diarmuid’s other daughter, Derb-Forgaill married Domnall Mac Gilla Mo-Cholmoc. This could have been true love, but chances are there was some measure of arrangement  here too. Diarmuid was constantly worried about the rival Gaelic clans – the O’Byrnes, the O’Tooles, the Ui Cheinnselaig ; by tying Domnall through marriage, he was assured of his support.

From Domnall’s point of view, marrying into such a strong family, and, even more importantly, being Strongbow’s brother-in-law, would ensure that the Mac Gilla Mo-Cholmoc clan would endure and adapt.