You are here: HomenextPLACESnextKINDLESTOWN CASTLE 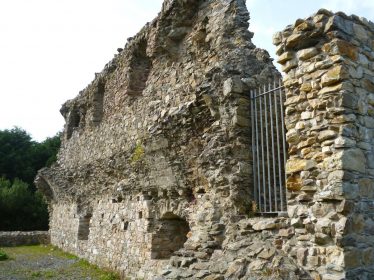 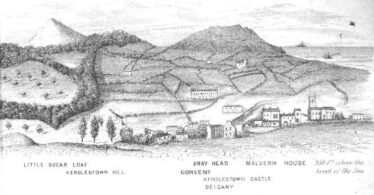 Kindlestown Castle is located in the townland of Upper Kindlestown. It may be one of  only two Hall Houses in the country, and is believed to date from the late 13th or early 14th century. The builder may have been Walter de Bendeville who in 1225 owned land in the Delgany area, though others believe the builder to have been Albert de Kenley , who was recorded as being in the area at the time of construction.

The Castle and the townland got their name from Albert de Kenley who was Sheriff of Kildare, and married a widow of the Mac Gilla Mo Chomoc family, the owners of Rathdown Castle. Kindlestown castle and lands were later held by the Archbold family who were recorded as “holding the castle with a watermill and 400 acres of land at Kindlestown”. After the reformation the lands and castle came into the possession of the Earl of Meath.

In 1855, when Richard Hewitt Bunn died, his father was recorded as John Bunn Esq. of Kindlestown Castle, County Wicklow.

Sketches by George Du Noyer, executed in the early 1840s, show Kindlestown Castle as a ruin with a two storey, three- bay house in the background.