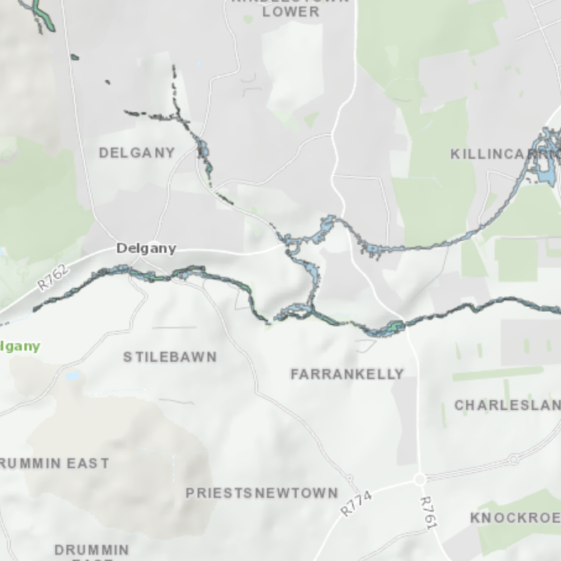 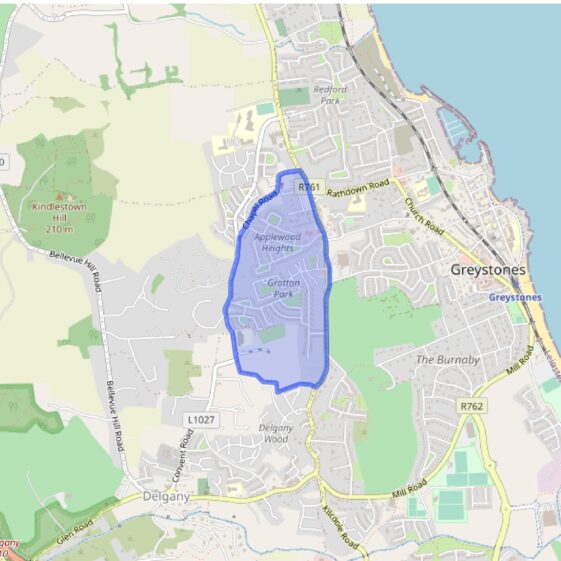 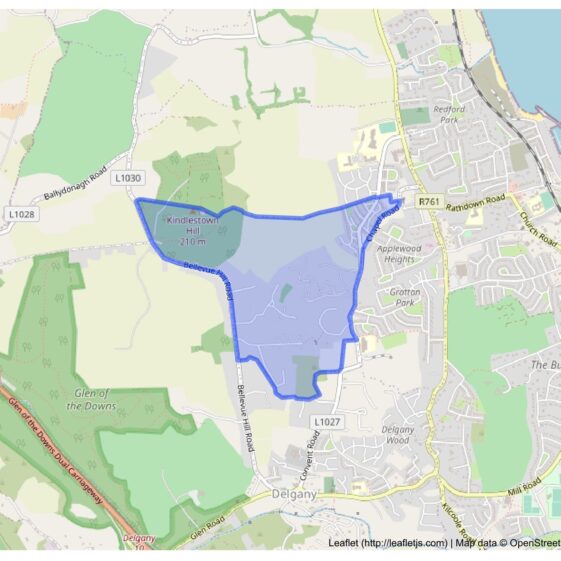 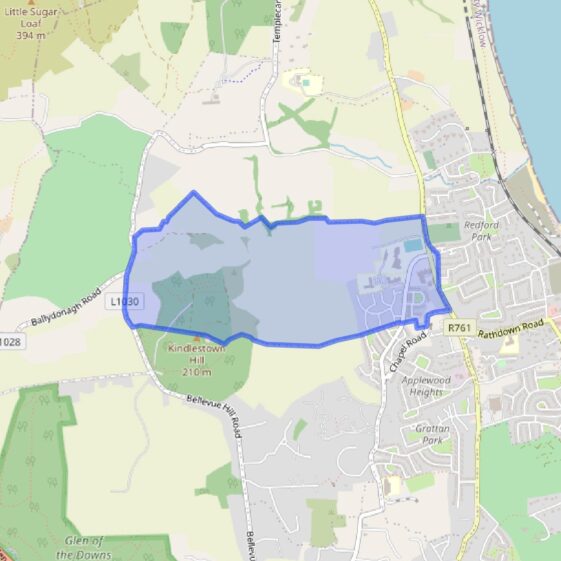 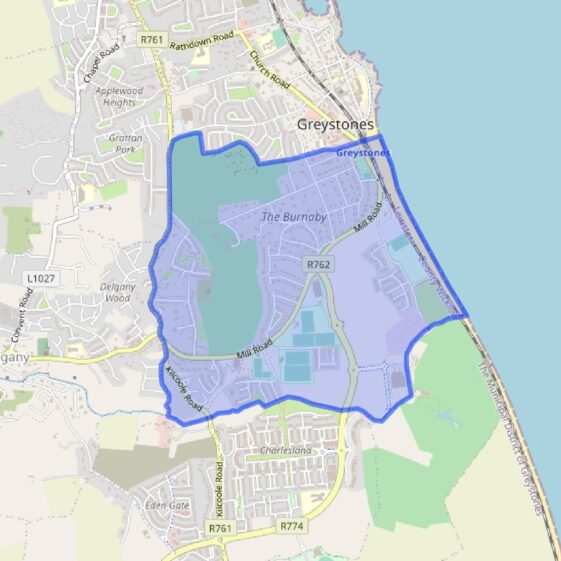 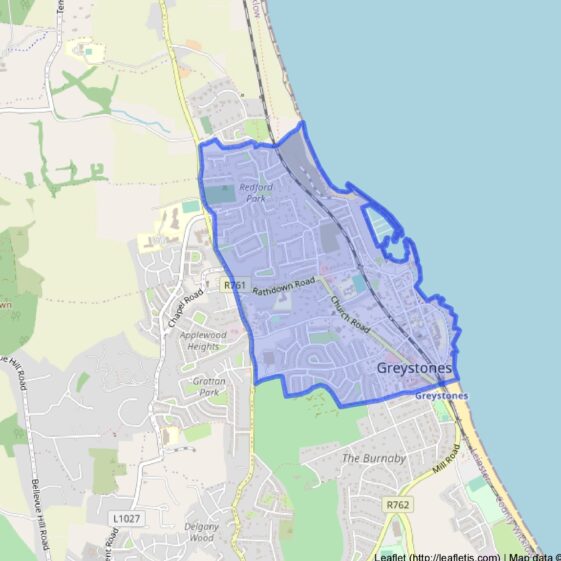 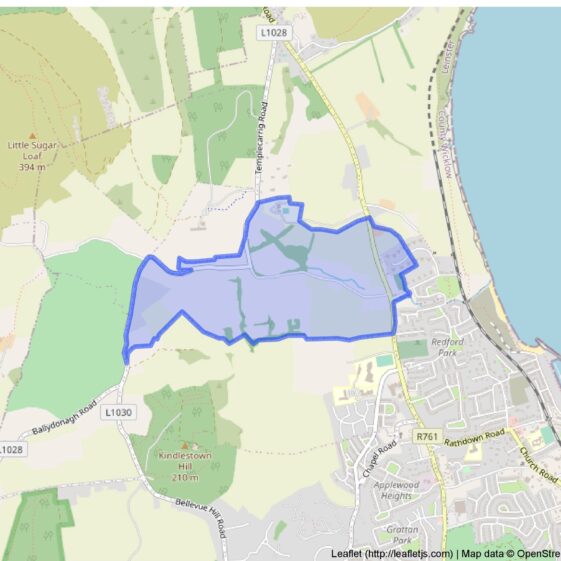 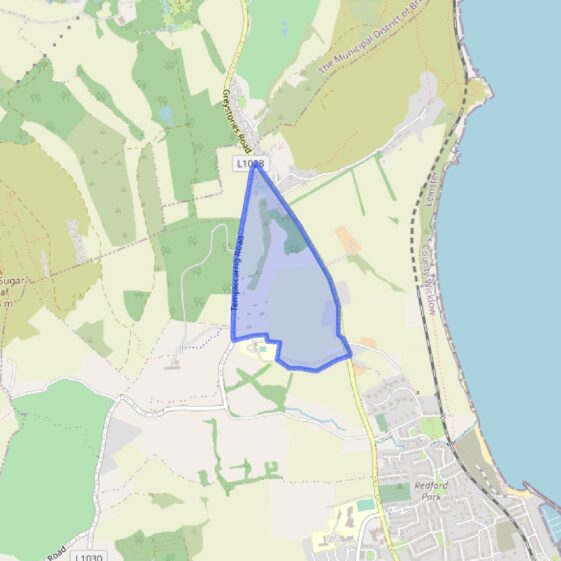 It appears that Blacklion gets its name from a coastal road connecting Bray to Wicklow, built by Gaelic chieftains prior to the Norman invasion, called ‘Bealach Laighan’ (Leinster pathway). This route was afterwards used by the Normans as a military road.

This townland is surrounded by the townlands Upper Kindlestown, Templecarrig and Coolnaskeagh. The Old Norse road ran through the centre of Coolagad. This road connected Bray to Delgany, leading from Windgates, past Templecarrig House to Kindlestown Castle, and into the village of Delgany. This region was held by the Archbold family  in the 17th century. Earlier, it had been an area of Scandinavian settlement. The place name is derived from the Norse word ‘gata’ meaning a road and the Gaelic word ‘cul’ which means ‘back’.

It is recorded that Windgates gets its name from “the royal road which is called le Windgates”, which was at the boundary of the new Norman Abbey of St. Thomas. The meaning is ‘windy pass or road’. The second part of the name derives from the old English ‘geat’ meaning ‘gap,’ or the old Norse ‘gata’ meaning ‘road’.

According to Canon George Digby Price in ‘The Stones of Bray’, Redford was the scene of a bloody battle in ‘the old days’. Sir Francis Blake Delaval  was created Baron Delaval of Redford Co Wicklow in 17 Oct 1783.

‘Carraig’ is the Gaelic word for ‘rock’, and ‘teampall’ means ‘church’. Thus Templecarrig means ‘the church on the rock’. The church of Teampall Carraige  was mentioned in the area of Delgany in 1518. The Church was reported by Eugene O’Curry in 1838, as being in an uncultivated field, known in the area as Church Bank. It was also believed that Upper Templecarrig had an ancient rath.

‘Rath’ is Gaelic for ‘mound’ and ‘dun’ is Gaelic for ‘fort’. The historic name Rathdown  dates right back to pre-christian times.  Erimon, High-King of Ireland, is believed to have constructed a rath and fortress here in 1699 BC. Rathdown Castle (1200 AD) was built on the site of this rath. The extensive barony of Rathdown stretched from here to Merrion Gates in Dublin.

Coolnaskeagh derives from the Gaelic ‘Cul na Sceach’ which translates as ‘hill back or corner of the thorn bushes’ according to Liam Price. In the 1950’s, he records there was a prominent rath located at Coolnaskeagh, which was on top of the ridge.

The name may have come from Baile Ui Dhunchadha or ‘O’Dunchadha’s place’. There was a mound on a gravel hillock at Ballydonagh, which O’Curry described in 1838 as “the remains of a fine moat”. This mound may have been the remnant of a fortress of Domhnall MacGiollamocholmog, the chief of Ui Dunchadha.

This townland’s original  name was Kendlestown. The name comes from Albert de Kenley, who lived in the area. Albert became sheriff of Kildare. He also married into the Mac Gilla Mo-Cholmoc family.

The Gaelic ‘coillin’ means ‘little wood’ and ‘carraig’ means rock – so ‘little wood on the rock’. The area was controlled in the 16th century by the Walsh family, originally from Wales.

‘Farran’ means ‘land, territory’ and ‘cille’ is Gaelic for ‘church’ – so, ‘land of the church’. The church in question is Ballynerrin church.