RATHDOWN AND THE NORSE 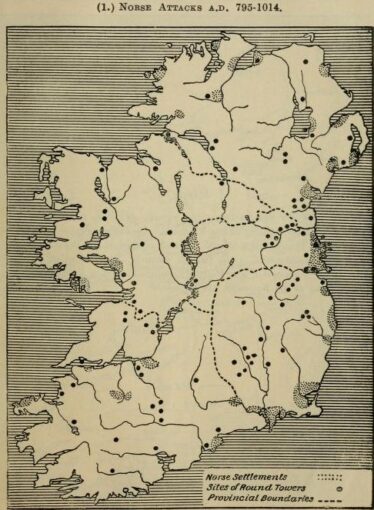 Rathdown may have suffered during the early Viking raids, as the east Wicklow coast was frequently targeted.

From the 10th century onwards, many Norse settlements appeared in east Wicklow, as shown in local placenames. Windgates and Coolagad use the Norse word for road (gata), possibly indicating that an old overland route, linking Dublin with Norse settlers further south, passed close by Rathdown (Smal, 1993).

The large decorated grave- stones known as the Rathdown slabs show a unique type of carving found only in the Rathdown barony. The Scandinavian settlers who lived in the region from the 9th to the 12th century are credited with the work. A number of the slabs were later built in to the walls of St. Patrick’s Cathedral and St. Audeon’s church. Three of the Rathdown slabs can currently be viewed at local Rathmichael church.

The Annals of the Four Masters report a significant battle at Delgany in1021. Sitric, king of Norse Dublin, was defeated by the king of Leinster. The Norse settlers in the surrounding area of Cuala were slaughtered by the victorious Irish after the battle.

The noble Gaelic Mac Gilla Mo Cholmoc family, who ruled at Rathdown over the centuries, demonstrated a remarkable ability to get on side by side with both Norse and Norman neighbours. This quality contributed to the longevity of the Gaelic family, and the flourishing of the foreign settlers (Smal, 1993).

Clarke, Howard & Johnson, Ruth : The Vikings in Ireland and beyond : before and after the Battle of Clontarf.