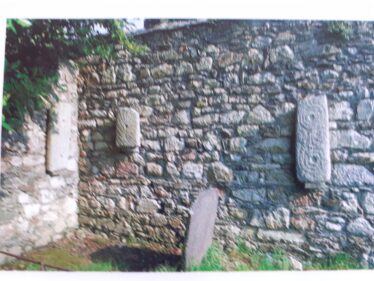 The large decorated stones, known as the Rathdown slabs, show a unique type of carving found only in the Rathdown area. The Scandinavian settlers who lived in the region, from the 9th to the12th century, are credited with the work. The Rathdown slabs were possibly used as gravestones. Some were later built in to the wall of St.Patrick’s Cathedral, Dublin,  and the entrance to St. Audeon’s church. Some of the remaining slabs can currently be seen at old Rathmichael church, and are used as the logo of the Rathmichael Historical Society.