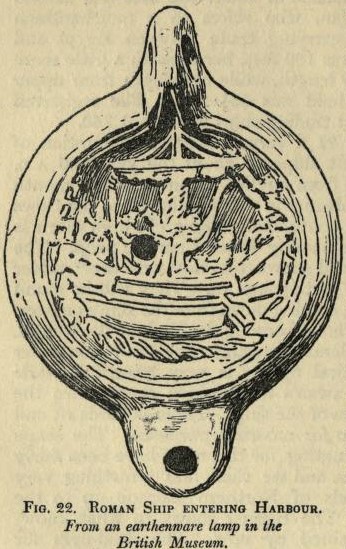 zoom
Sailing Ships : the story of their development from the earliest times to present day, E. Keble Catterton, Sidwick and Jackson, 1909, page 82. 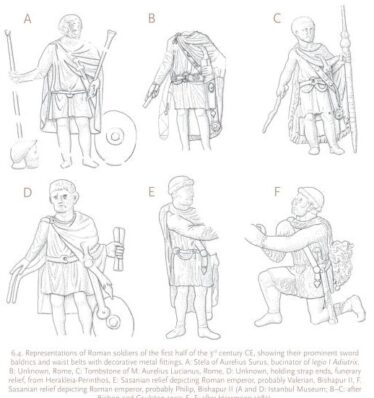 Ireland was one of the few areas of Western Europe not conquered by the Romans.  There was, however, close commercial contact, with constant trading between the east coast of Ireland and Roman Britain throughout the Roman occupation ( 50BC – 350AD)

Drumanagh fort, just north of modern Dublin, acted as chief trade centre, along with nearby Lambay island. The “ ruman ” in Drumanagh comes from “ roman”, and numerous Roman artefacts have been discovered at this site. Graves on Lambay island have been found to contain first century Roman brooches and other ornaments.

A number of Roman graves were uncovered at Bray Head in 1835. These burials consisted of extended skeletons with stones placed at their head and feet. The interments were also accompanied by copper coins of Tragan (97-117 AD) and Hadrian (117-138 AD). It is possible that this is evidence for the Roman burial custom of placing coins on the mouths and eyes of the deceased. These were intended as payment for the ferryman Charon, so the river Acheron could be crossed, into the land of the dead.

With so much contact between the east coast and Roman-occupied Britain, it was perhaps inevitable that young Irish adventurers began to take the short journey across the sea in search of new opportunity (sound familiar ?) As the Irish population grew, more and more journeyed over. Many of these young people enlisted in the Roman army and served in Britain and on the continent. By 350 AD the young men of Leinster were well represented in the Roman army. They had their own group, the Attacotti ( Aithechthuatha ),who could draw on fresh recruits from home.

Roman coins from the first two centuries AD have been found near Rathdown, suggesting that the agricultural community here may have been involved in direct or indirect trade with the Romans. It is also quite possible that some young Rathdown men may have swopped their harvesting and husbandry duties for a life of adventure alongside the legionaries of the Roman army.