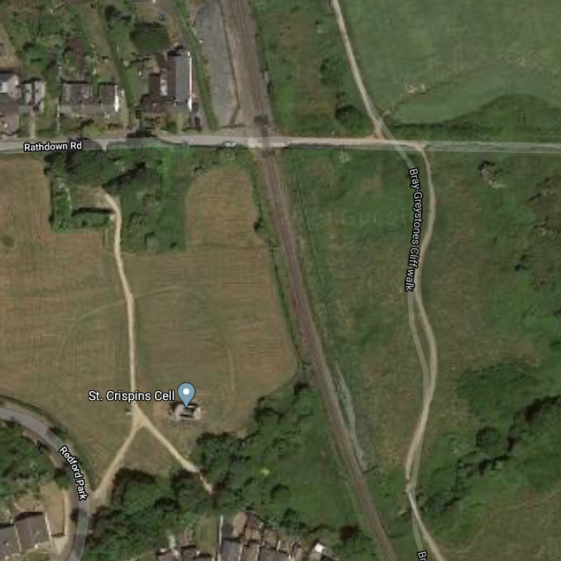 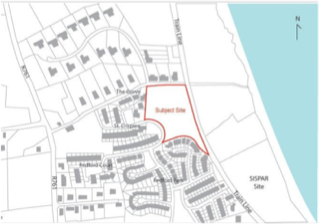 Housing pressure : the Heritage Park, surrounded by housing estates on 3 sides and the railway to the east
Courtesy of Ejvind Mogensen 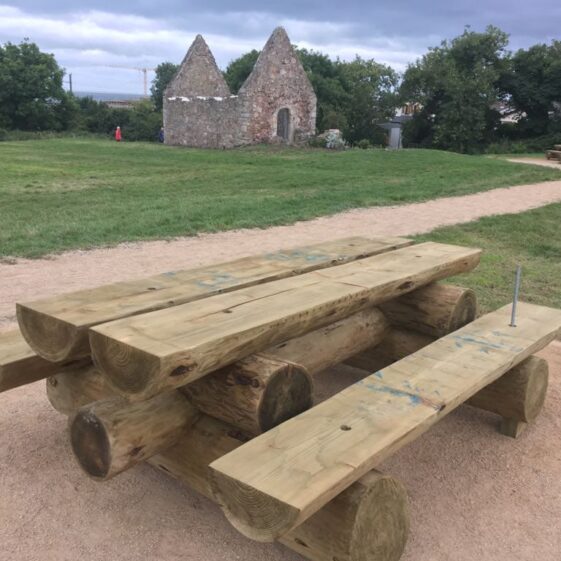 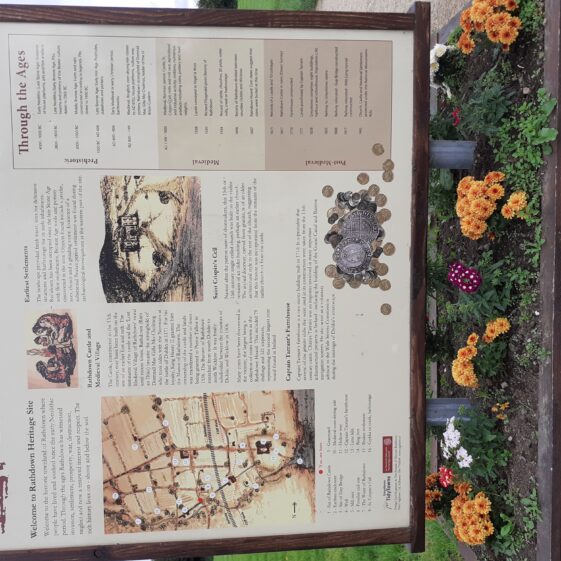 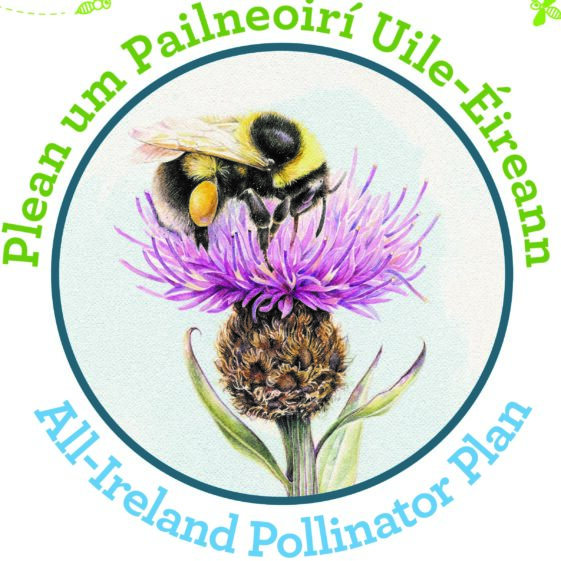 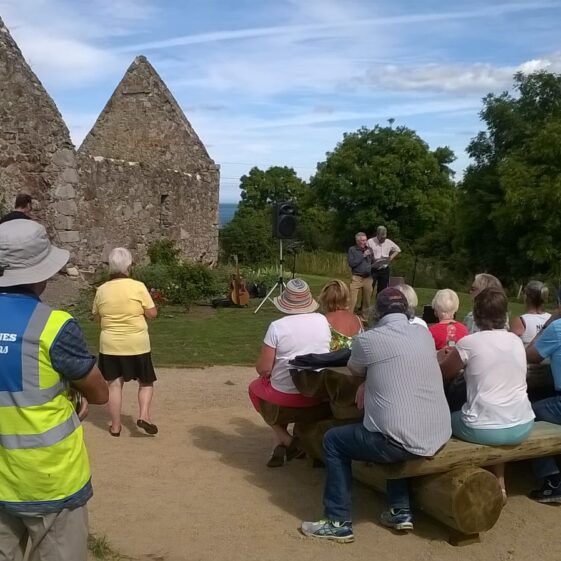 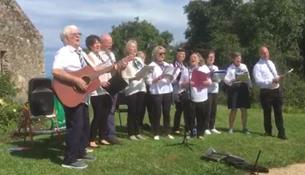 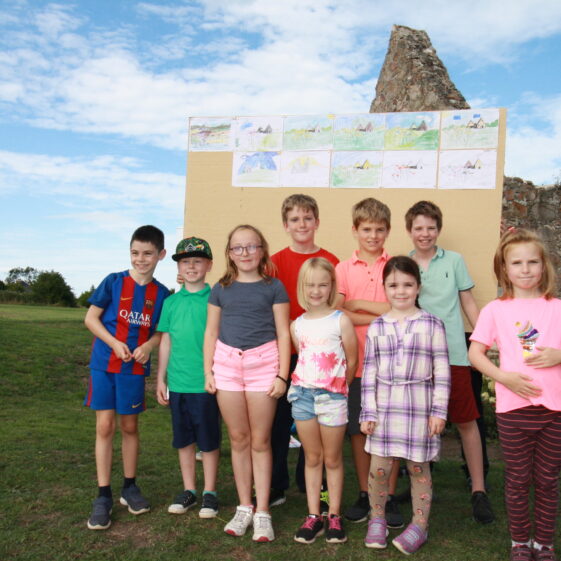 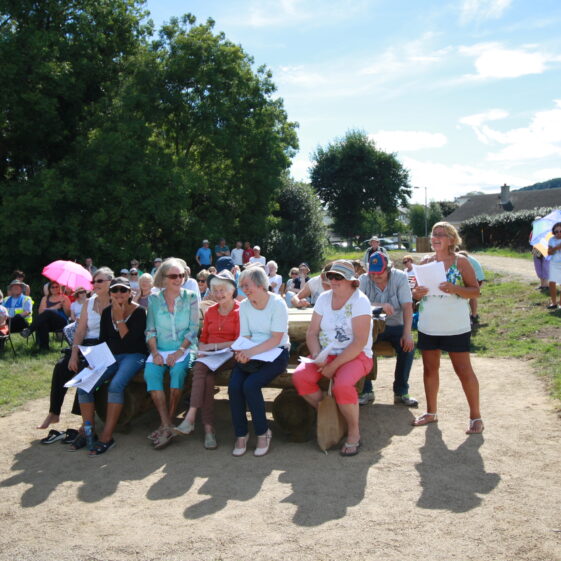 Appreciative Heritage Day audience. Parasols in Ireland, whatever next ?!
Image by Dave O'Reilly 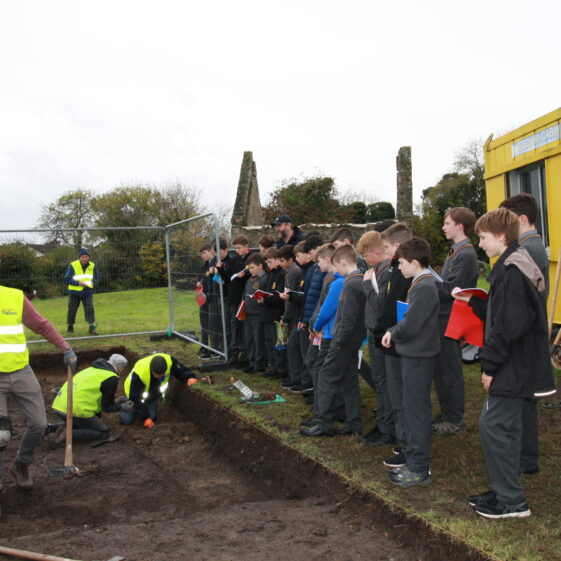 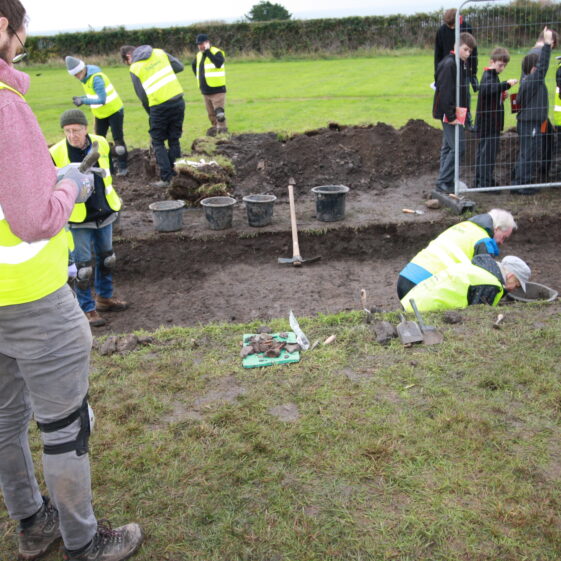 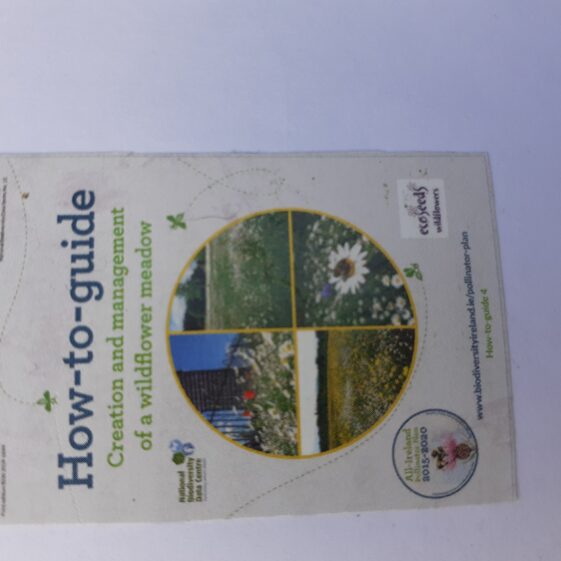 The historic St. Crispin’s and Rathdown site is located just north of Greystones, and links with the site of ancient Rathdown Castle and village, the Cliff Walk, and Greystones north beach and harbour development. The site is owned by Wicklow County Council, and contains the ruins of St. Crispin’s Cell and Captain Tarrant’s Farmhouse and outbuildings. The site has yielded evidence of pre-historic, early Christian, medieval and post-medieval settlements.

A 1983 planning application for 119 houses was turned down by Wicklow County Council – good news !

Unfortunately the application was denied on the grounds that the sewage system could not cater for the density involved. There wasn’t an acknowledgement, in the refusal, of the OPW submission that no development should take place “since the area was the lost medieval village of Rathdown”.

In 1985, the developer successfully appealed the decision to An Bord Planeala, but no construction took place, and planning lapsed.

In 1990 a planning application for 89 dwellings was submitted to Wicklow County Council. It proposed the use of most of the St. Crispin’s site, and the demolition of Captain Tarrant’s farmhouse, only leaving a small piece of land surrounding St. Crispin’s Cell. Despite growing evidence of the historic nature of the site, WCC granted permission.

The community in the adjoining Grove housing estate, appalled by what had been proposed, raised vigorous opposition to the scheme, and sought help from specialists in archaeology, history, planning and ecology, to comprehensively establish the authenticity and  compelling historic importance of the site. Willing support came from many sources,  and an intensive investigation was launched, involving all modern  research tools such as aerial photographs, a geophysical survey, and the cataloguing of the many artefacts found on the site over the years. The information obtained exceeded expectations, and public meetings were held to brief the residents of Greystones, many of whom  were unaware of the existence of the site and the heritage that lay at their doorstep.

Local Grove resident, Dr. Chris Smal, founded “The Friends of Historic Rathdown” to protect the site. This important local group was graced by many distinguished patrons, such as Garret Fitzgerald, Eamon de Buitlear, Prof. F.X.Martin, Bernard Farrell, Leo Swan.The efforts of Friends of Historic Rathdown led to the publication of a book in 1993 detailing most of the information gathered :

The planning permission granted by WCC in 1990 was subsequently appealed to An Bord Pleanala and overturned. Following research presented in 1992, the Office of Public Works registered the entire area of the medieval site (about 10 acres) as a National Monument. See extract on ecology from the An Bord Pleanala appeal.

A huge debt is owed to Friends of Historic Rathdown and all those involved in the original crusade. Without their actions, Rathdown as we know it would not have survived, for this and future generations.

Meanwhile, however, the site and the buildings remained overgrown and neglected, and vandalism in the form of graffiti and littering was rampant.

St, Crispin’s site again gained attention when a major clean-up was carried out in 2010 by the local community, organised by Councillor Simon Harris and supported by Wicklow County Council. ‘No Dumping’ signs were erected at the two entrances. The sign at the northern entrance included a brief description of the site, in an effort to spread awareness of the historical significance. Following the clean-up, local residents were invited to submit their ideas and opinions on the future use of the site.

With this in mind, a local Urban Design and Planning Consultant prepared the ‘Rathdown Heritage Park Design Strategy’, which suggests reviving the site, using a bottom-up and phased approach that can be carried out as funding becomes available.

In 2013, the Greystones Tidy Towns group decided to adopt the principles of the ‘Rathdown Heritage Park Design Strategy’ . A Tidy Towns sub-committee for St. Crispin’s was established and, in cooperation with the urban designer, the ‘Strategy’ was updated and further developed.

In summary,  the ‘Strategy’ proposes three phases, to be implemented as funding becomes available.

This phase contains the most necessary interventions and was considered a minimum.

It focuses on upgrading the visual image of the site by cutting back vegetation, making a plan for regular maintenance, and establishing a footpath through the field to connect the two entrances and provide better connection between Redford Park and the seafront. Also this phase would include the widening of entrances, setting back and slightly moving the Redford Park entrance, and finally to install a historical information sign at that entrance.

It proposes to tackle antisocial behaviour by involving local teenagers in the development plans for the site. It offers options for physical interventions in respect of buildings and areas for possible teenage activity, fixing broken fences, and further cutting back of foliage around buildings and along the stream. A number of signs to be developed and placed on the site to explain historic and archaeological facts as well as the site’s fauna and flora.  Literature to be produced, and signs to be placed on the Cliff Walk and in other relevant places, drawing the attention of walkers to the site.

While the first two phases were considered necessary, phase three suggests interventions that, while requiring greater funding, planning and maintenance, would help to fully unlock the potential of the site.

It suggests benches along the main pathway, a communal covered area in the form of a pavilion or  gazebo, a children’s playground with slides, swings and similar outdoor activity equipment, a boardwalk along the stream to link up with the footpaths and, though the problem of vandalism needs to be considered, lighting along the paths and in other selected areas.

Aiming initially on implementing phase one of the Strategy, the GTT sub-committee on St. Crispin’s started by co-opting representatives of residents’ associations in the area. Several meetings took place, and consultations were held with a local heritage expert and   Heritage Officer, Deirdre Burns, in order to ensure that GTT’s plans conformed with the laws of the land.

2014-2015: Grant applications and work on new footpath and interpretive signage

In December 2014 the ‘Rathdown Heritage Park Design Strategy’ was officially submitted as a contribution to ‘Wicklow County Development Plan 2016-2022’ and to the ‘Local Economic and Community Plan’. As a result of this submision, a grant of €20,000, towards the development of St. Crispin’s, was awarded from the tourism budget of Wicklow County Council.

Funds were raised for a temporary footpath through St. Crispin’s, and plans were submitted to the District Engineer for his approval. However, rather than approving GTT’s plans, Wicklow County Council decided to allocate the above €20,000 for WCC to build the footpath.

Work was carried out on the design of interpretive signs and a grant of €3,000 was awarded by the Heritage Council towards their construction and erection.

In respect of the ruined and protected Captain Tarrant’s Farm House and Outbuildings, a local chartered engineer undertook a Structural Appraisal and a local quantity surveyer made a Cost Estimate aimed, initially, at making the buildings accessible and safe. Based on the survey and cost estimate, a grant of €10,000 was applied for from Wicklow County Council’s ‘Merit Awards” scheme – but not approved.

Two further applications resulted in a grant of €1,000 from ‘Veolia’ and another grant of €500 from Wicklow County Council. These grants were earmarked for improving the main footpath leading through the site.

Consultations took place on most of the above issues with a local heritage expert and with WCC Heritage Officer, Deirdre Burns.

Two major clean-up and litter projects were carried out during the earlier years of GTT involvement.  Since then, the field has generally been well maintained and kept clear of litter. GTT have hired local farmer Robert Kelly to ensure regular planned grass-cutting, and smaller footpaths have been developed through the grassed areas.

As promised by Wicklow County Council, and following some GTT pressure, a proper main footpath through the field was finally constructed in 2016.

Interpretive signage had been developed and produced by 2012/13, but was burned while temporarily stored at WCC premises. Only during 2017 did the Council have a copy of the main sign produced and erected at the site. GTT has had the sign properly framed and the concrete foundation clad with wooden panelling.

At this time, GTT and Redford Park Residents’ Association reported stonework deterioration and vandalism at the protected St. Crispin’s Cell. WCC carried out the repairs, making sure to use original methods and materials.

Benches and tables to be placed along the footpath were identified by GTT and erected and paid for by WCC.

A geophysical survey was conducted on the St. Crispin’s site and on the site of the now- disappeared Rathdown Castle.

Acting on the positive indications from the geophysical survey, a community  archaeological excavation was initiated. Permission was secured by ‘ Irish Archaeological Consultants Ltd.’ (IAC), and part-funding was obtained through the ‘Creative Wicklow Grant 2018′.

The dig took place during the period 5-9 November 2018. It was advertised in local papers and on posters placed in and around Greystones, in secondary schools, and in the Dublin Universities. The community response was heart-warming – 75 names were registered, and 64 actively participated in one or more of the 8 dig-sessions. On average, 11 volunteers were digging at any one time during the 4-day digging period. Sixteen transition-year students and 7 or more university students were among those registered for the dig.

A portacabin for coffee breaks had been borrowed from WCC, tools were supplied by GTT and coffee/tea and biscuits were served by GTT members.The excavation was extremely successful in promoting  community involvement, ownership and care for the area. David Mc Ilreavy, from IAC, was present throughout the dig, to guide the volunteer diggers and to register and safeguard relevant finds. The IAC representative also answered questions, and provided historic and archaeological background to those involved and to the many onlookers.

Late November 2018 GTT arranged a meeting to present the results of the dig. All diggers were invited and about 50 turned up. A film of the dig was shown and David Mc Ilreavy talked about the finds and the history attached.

An IAC report, detailing the finds and their significance, can be seen below.

Members of GTT’s St. Crispin’s sub-committee contributed a five- page article to the winter 2017 edition of ‘Archaeology Ireland’. The article is entitled ‘New Insights into the Church known as St. Crispin’s Cell and the Site of Rathdown Castle, Co. Wicklow’. See the  article on https://www.jstor.org/stable/90019267?seq=1#page_scan_tab_contents.

To supplement the original ecology report prepared for Friends of Historic Rathdown in 1993, Heritage Officer Deirdre Burns commissioned a full study of the St. Crispin’s site by  biodiversity expert, Oran O’Sullivan. Many of Oran’s recommendations have still to be fully implemented. They are a blueprint for biodiversity best practice into the future. Oran’s report and proposed plans can be seen below.

One important recommendation was for the creation of a wildflower meadow ; this is now happening in the lesser-used  NE and NW corners of the site, closely following the wildflower management ‘How-to-guide.’

National Heritage Day has been celebrated at St.Crispin’s Cell in 2017, 2018 and 2019, and has gone from strength to strength, with guest speakers, heritage displays, uileann pipes, bodhrans, musicians, an ecumenical choir, children’s art / heritage competitions, and big community support.

Comments about this page