You are here: HomenextPEOPLEnextDIARMUID MAC MURCHADA 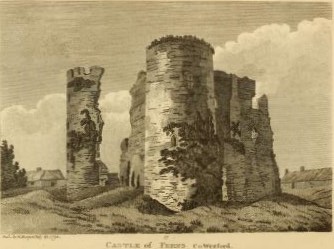 Diarmuid Mac Murchada (1110-1171) was the villain of Irish history. He may have had some redeeming characteristics, but none of these survive in the record books which bulge with stories of his ruthlessness, cruelty, treachery, and lust for power. Oh, and the small matter of causing an 800- year invasion of his homeland.

• On succeeding his father as king of Leinster, Diarmuid decided to show who’s boss by killing or blinding 17 rival chieftains (1141).
• One of those blinded by Diarmuid was Muirchertach Mac Gilla Mo-Cholmoc.
• In 1153, Diarmuid ran off with the wife of Tighernan O’Rourke, king of Breifne (Leitrim/Cavan), while Tighernan was on pilgrimage.
• True to form, Diarmuid also took her large dowry.
• High-King Ruadhri Ua Conchobair finally deposed Diarmuid in 1166, and he was forced to leave Ireland.
• Desperate to regain power, Diarmuid sought help from King Henry II, and then Strongbow.
• In order to clinch the deal with Strongbow, Diarmuid offered land, and the hand of his daughter, Aoife, in marriage.
• This deal sealed the Norman Invasion. The occupation lasted 800 years. The effects are still being felt today.
• Another arranged marriage followed. In order to ensure the support of the Mac Gilla Mo-Cholmoc clan, Diarmuid offered the hand in marriage of his other daughter Derb-Forgaill to Domnall Mac Gilla Mo-Cholmoc. Diarmuid had previously blinded Domnall’s uncle Muirchertach. Domnall managed to conceal his animosity, possibly realizing that being Strongbow’s brother-in-law could help his clan survive through the new order.
• Diarmuid came back to Leinster early, with an advance-party of Anglo-Normans. He later assisted Strongbow in the capture of Dublin.
• He died in 1171 before seeing the full realization of his lust for power. Strongbow succeeded him as ruler of Leinster.